Meet the girl behind the brand... My name is Denara, I am the girl behind SEDA Collective.

I am often behind the insta feed, emails or packing your orders but I thought it is time to tell you more about me.

I am an Uyghur/Uzbek woman, born and raised in East Turkestan, I lived along the ancient silk road before moving to Australia when I was 12. I did not speak any English before moving here, I didn’t even know where Australia was on the map….14 years later this is now my home.

I studied linguistics in university in the hope of becoming a translator, I can speak 4 languages, after feeling a bit lost at uni, I decided to travel and I ended up doing a lot of eating, dancing and beading!

My solo trip to Colombia in 2017 was actually just an idea but even when it did happen, it was meant to only be two months long but I was at a friend’s house and he had a beaded bracelet sitting on his shelf so I ask him where is it from, he then took me to meet Anyi who makes all of our ANYI bracelets. Later on by chance I met Mauricio who taught me how to bead and we were in a typical Colombian restaurant for lunch that cost about 6 Australian dollars (it was the best food I have had) when we designed the first collection. 7 months later, I cancelled the rest of my plans, used the rest of my travel budget, worked with Anyi and Mauricio and made the first collection for SEDA then I came back to Australia to bring my vision into life.

Many didn’t quite understand why I wanted to do this. When I told my idea to others they just thought just another hippie with a wild dream. And you might have been wondering too, why a Uzbek/Uyghur girl that lives in Australia wants to work with Colombian artisans, I guess my own migrating from continent to continent, learning new languages, seeing different cultures is exactly why, I realised stories told through wearable art is without borders, stories woven into jewellery should be celebrated without borders. As someone who spent 3 years studying languages and linguistic and power of words, I have realised the most universal language is through art.

So, just like that, we launched the website officially in July 2018. With the mission to empower indigenous artisans with a strong focus on women, to preserve culture and to tell stories through wearable art.

Thank you for joining me on this journey and this is only the beginning...

Let customers speak for us

perfect bag that goes everywhere with me, its a good size, i love the wide comfy strap and the pattern and the meaning behind it. absolutely in love!!!! 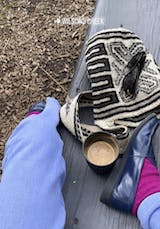 My mochila and I are inseparable now. I took it around Europe and used it everyday, best everyday, beach, travel bag ever. Love it so much! 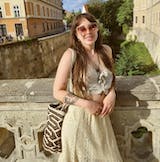 Arrived in beautiful packaging which clearly had alot of care and effort put into. The earrings are exactly as they appear on the site and look beautiful on! I only wish I could upload a photo on this review.

I bought this beautiful coat for a friend, it is absolutely stunning, fell in love with it online but it is even more beautiful in person! so well made! 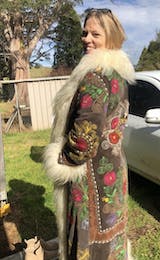 I spotted this coat miles away at a SEDA market in person. I knew immediately this was going home with me, I fell even more in love after I tried it on and realised it is perfectly my size. I absolutely love this coat, it is the most special piece in my closet. 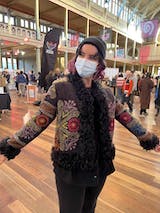